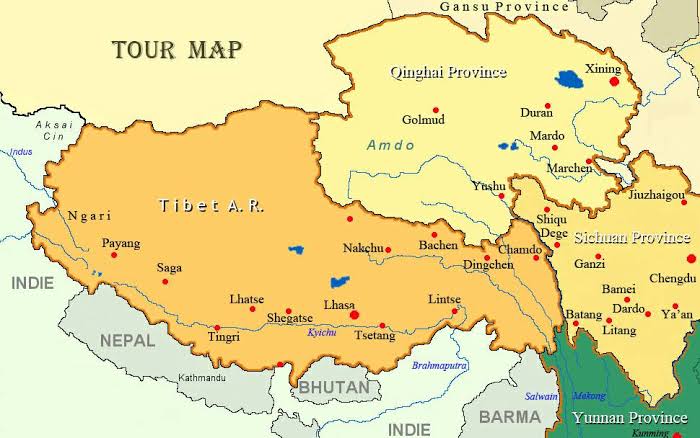 Tibet lies on the Qinghai-Tibet Plateau of the southwest border of China. The average height of the whole region is more than 4,000 meters above sea level, for which Tibet is known as “Roof of the World”. The highest peak of Tibet, also the highest in Himalayas and in the whole world, is Everest Peak, which is as high as 8,846.27 meters above sea level.
Capital of Tibet – Lhasa
Population – 2.62 million
Religion – Buddhism, Islam & Christianity

Languages – Tibetan, Dzongkha, Sikkimese, Sherpa, and Ladakhi Although a part of China, Tibet has a unique culture of all there own. It is mainly inhabited by Tibetans, a minority nationality of old and mysterious people. Tourist attractions include the Potala Palace in Lhasa, Jokhang Temple, and a number of Buddhist sacred places.

Tibet (Xi Zang in Chinese) is to the south of Xin Jiang Uygur Autonomous Region and Qing Hai Province, to the west of Sichuan, to the northwest of Yunnan and to the north of India and Nepal. Its population of 2.3 million people comes from a variety of ethnic groups including Tibetan, Han, Monba, and Lhota.

Northwest Tibet, mainly the Qing Hai plateau, is home to a variety of unusual and unique animals. Across the northern expanse of Tibet, you can see vast grasslands where horses, yak, and sheep roam freely. The world’s lowest valley, the Grand Yarlun-tzanpo River Valley lies in east Tibet.

Nearly all Tibetans follow Tibetan Buddhism, known as Lamaism, with the exception of approximately 2,000 followers of Islam and 600 of Catholicism. Tibetan Buddhism was greatly influenced by Indian Buddhism in its early time, but after years of evolution, Tibetan Buddhism has developed its own distinctive qualities and practices. A well-known example is the belief that there is a Living Buddha, who is the reincarnation of the first, a belief alien to Chinese Buddhism.

Tibetan Buddhism has exerted an extensive and profound influence on the Tibetan race. Buddhism spread into Tibet in the 7th century, and gradually infiltrate Tibet’s history, politics, economics, culture, exchanges and habits, and customs to become the most extensively worshipped religion of Tibetans. Prolonged ethnic-cultural exchanges also enabled Tibetan Buddhism to make its way into the Mongolian, Tu, Yugu, Luoba, Moinba, Naxi, Purmi and other ethnic minority nationalities throughout China.

Buddhism has long been widely worshipped in China’s Tibet Autonomous Region, as well as Sichuan, Yunnan, Gansu and Qinghai provinces, and the Xinjiang Uygur and Inner Mongolia autonomous regions. It has also made its way into Sikkim, Bhutan, Nepal, the Mongolian People’s Republic and Buryat in the Republic of Russia.

More than 1,400 Tibetan monasteries and other religious venues were renovated and opened following the peaceful liberation of Tibet in 1951. Chinese government and policies for religious freedom enable 34,000 monks in various monasteries to freely study Buddhist sutras and hold various types of Buddhist activities in their respective monasteries. In addition, the broad masses of religious have set up shrines, Buddha halls and sutra recitation rooms in their homes, and undertake pilgrimages to sacred sites

Tibetan Festivals
New Year Festival(Losar): It is the greatest festival in Tibet. In ancient times when the peach tree was in blossom, it was considered as the starting of a new year. Since the systematization of the Tibetan calendar in 1027 A.D., The first day of the first month became fixed as the new year. On the new year’s the families unite ” auspicious dinner” is offered and the auspicious words ” Tashi Delek” are greeted. It is the most colorful festival of Lhasa. Monlam (great prayer festival of Lhasa) .Known also as the great prayer festival, this is held midway through the first lunar month. An image of Maitreya from the Jokhang is borne around the Barkhor, attracting enthusiastic crowds of locals and pilgrims.

Saga Dawa Festival (May or June): It is the holiest in Tibet, their memorable occasions coincide on this day, buddha’s birth and buddha’s enlightenment. Almost every person within Lhasa join in circumambulations round the city and spend their late afternoon on picnic at “dzongyab lukahng” park at the foot of Potala.

Gyantse horse race & Archery (May or June) : Horse race and archery are generally popular in Tibet, and Gyantse enjoys the prestige of being the earliest in history by starting in 1408. Contests in early times included horse race, archery, and shooting on gallop followed by a few days’ entertainment or picnicking. Presently ball games, track and field events, folk songs and dances, barter trade are in addition to the above.

Shoton Festival (August) : It is the opera festival and the greatest festivals in Tibet. In ancient times pious folks went into mountain hermitages of which yoghurt was served for meal followed by entertainment of folk songs and dances. Since the 7th century, opera performances were held for days in Norbu lingka. Presently, opera contests and distribution of prizes are held for seven days.

Harvest festival (September) : The farmers in Lhasa, gyantse and shangnan to celebrating their bumeer harvest in this time. During that time, people enjoy with horse racing games, costume fashion show, songs and dance archery and picnic, etc.

Bathing week: It is believed when the sacred planet Venus appears in the sky, the water in the river becomes purest and cure diseases. During its appearance for one week in the sky, all the people in Tibet go into the river for bathing.

Changtang chachen horse race festival (10 august) : As the most important festival in north Tibet during the golden season on the grassland, thousand of herdsmen throng to nakchu riding fine horses, and carrying the local products. They form as city of tens south of nakchu town. There will be thrilling horse race, archery and demonstrations of horsemanship. Songs and dance troupes from all part of Tibet will add to the fun.

Ganden festival: On the 15th day of the 6th Tibetan month, 25 precious articles belonging to Ganden monastery, which are normally locked in their treasure house, are displayed in the main shrine hall. A grand offering ceremony accompanies the display. These articles consist of the images of the sixteen arhats, akshobhya, the secret assembly, the four great kings, the upasaka and hashang image. Adventure tours in Tibet overland are very interesting and heart touching, and also very difficult we advise our clients to please read the following:

Insurance: You must insure yourself against sickness, emergency rescue, accident, Hospitalization, cancellation, etc., as we accept no responsibility for expenses which may arise from mishaps to persons or their belongings during these tours.

Altitude Sickness: The Tibetan Plateau lies over 12000 feet, most people will experience some of the minor symptoms and discomfort of altitude sickness, until their body adjusts to the elevation. This can take from a few hours to a couple of days, depending on the individual. Please consult with your doctor and ask for their advice.

Risk and Liability: We will make every effort in making your journey smooth and pleasant. However, as all Tibetan tours are run strictly under the Tibet Tourism Authority, Wonderland Treks and Tours and its agents shall not be responsible for any change or cancellation of flight, delay in arrivals, sickness or accidents. These altimeters, drinking cup, towel, plastic bags, dust mask, strong sun cream, chapstic, and money belt.

Why Book With Us?

Do not hesitage to give us a call. We are an expert team and we are happy to talk to you.